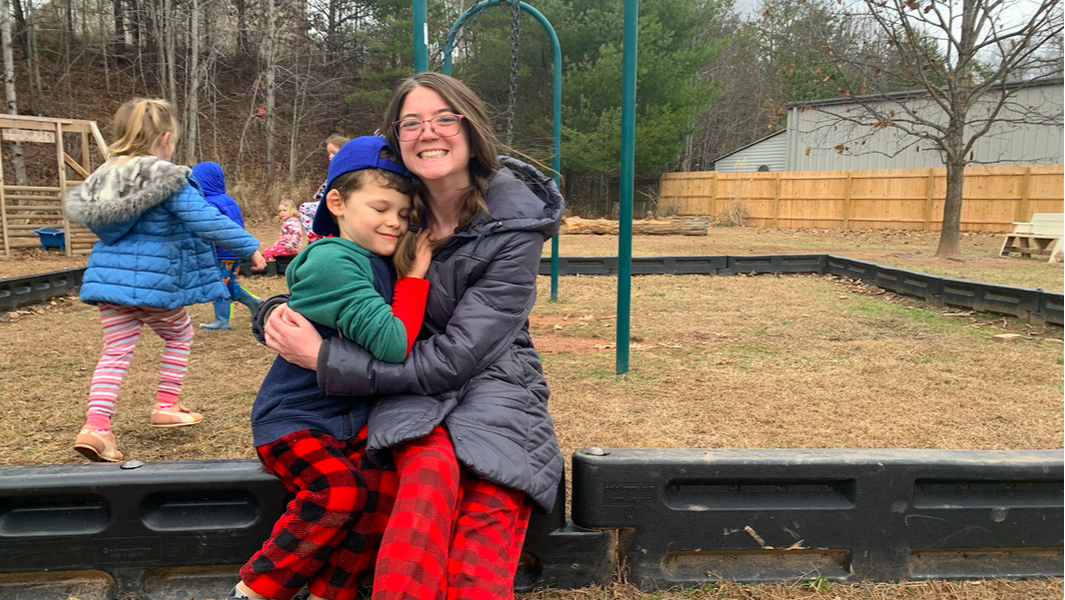 Veronica’s SI Story: ECE during COVID
Veronica is a preschool teacher in North Carolina. When her county went under stay-at-home orders in the spring, her school stayed open with minimal staffing to care for children of essential workers. Veronica spent 3 months away from work before returning full-time to her classroom. Here are some pieces of our conversation with her about returning to work, changes to teaching, and the impact of the pandemic on young children.

Did you have any way to connect with your students during quarantine?
Every year I make a photobook for the kids which usually has a few pictures from every month of things that they’ve done and then I give it to them at graduation- just as a bit of memorabilia for the year. But this year I didn’t get to finish them so I finished them at home and sent them out with a little note saying how much I miss each kid. I hoped that they were doing well, just to let them know that they weren’t forgotten. Some of the kids wrote back to me and I would write back to them, so I had a couple that I was little pen pals with for a while.
I made some Youtube videos so that families could play that for the kids. And a lot of them had reached out and said how important that was to them and how much the kids really enjoyed seeing me and feeling that connection to their preschool class- especially while a lot of them weren’t coming to school. That was really nice to hear. One kid made me a little wood magnet that he had burned a picture into, his dad had helped him. It was the two of us on the playground at school and it was really sweet. Those little handmade gifts and the families saying how much they appreciate you, the time and care that they feel their child has gotten- that means a lot to me because I do try really hard to create those relationships and they mean a lot to me.


What has it felt like to go back into the classroom after your time at home?
It’s so conflicting. It’s really hard because on the one hand I’ve missed these kids. They’re important to me and I understand this need to feel secure and have that physical contact through a hug. But it’s also scary to me. It’s really scary because I don’t know how each family is handling social distancing. You know, we’re all in the school together and even if I’m wearing a mask, it’s an air conditioned room with 14 young children who in the best of situations share germs so easily. So there’s fear and then guilt for feeling that fear. Because I want to be this heroic person charging in and taking care of these kids without a second thought. But it is scary, it’s really scary. I have a lot of concerns about it.


What is different about how you work and interact with co-workers?
We have a lot less adult interaction now, largely because we can only have one adult per room. When you’re with a co-teacher you can bounce things off someone else. And you can take a break if you’re having a hard moment. But that isn’t there anymore - you don’t have any cushion. At the time where teachers are at their most frustrated and distressed.

We can sometimes have distanced conversations, but it’s really not possible to actually converse while you’re also trying to do your job. Because the kids need your supervision and attention. And you can’t get a whole conversation in without someone needing or wanting something. It’s difficult, I think, when there’s not time to feel that collaboration from other people. And that’s not built into the day. That’s something that was hard even before COVID.


What have you noticed about children since the pandemic started?
It’s really evident that the kids are feeling the impact of it: they’re way less focused. Everything’s really been upended for them. The teachers have been trying to maintain as much consistency as possible. It’s really hard because we are trying to be outside as much as possible to, you know, limit exposure. And a lot of the teachers have very little training in how to run an outdoor classroom. We’re trying to keep kids apart more as much as we can- which feels so counterintuitive to all developmentally appropriate practices. It’s a big strain, trying to maintain a nurturing environment- which is exactly the thing that we’re trying to do. So you can tell the emotional distress of it for students and staff. And it’s like a big feedback loop, you know, that stress feeds off itself. I feel like our program is doing as well as it can. But it definitely doesn’t feel the same as it used to feel. There’s a lot more tension in the air and there’s a lot more exhaustion on the faces of the people taking care of the kids. It’s exhausting because the children are not getting stimulated in the same way.

Some of the children seem to be taking it all in stride, but there are a couple who seem… it seems to really be taking a toll on them. They aren’t really playing with other kids as much, and there’s less variety in their play. Inside they’ll do legos or outside they’ll be on the swings a lot, they’ll be kicking the ball around and looking for bugs. Before, there was a lot of moving from center to center and having very diverse conversations and interactions with peers. It might be caused by teachers trying to limit the movement around the class, keep children in centers for longer just to minimize exposure. There aren’t as many toys available because everything has to be cleaned so often. I think teachers are feeling reluctant to pull things out. You know, especially if they’re difficult to clean. And two, things have to be cleaned so often that things can’t be as high rotation so there are fewer supplies. There’s a lot less creative and cooperative play- a lot less imaginative play. It’s almost a regression towards an earlier stage of play that you wouldn’t expect an almost kindergartener to do. I’m seeing a lot more concrete play that you would expect from three year olds. I wonder if that’s just easier to do right now - if they’re feeling stressed and can’t as easily project to that imaginative prefrontal cortex piece of themselves that should be developing more at this age.


What do you think will be different about the way you teach this year?
I think it will require a lot of retraining in a lot of teaching methods- which could end up being really great. I think we’ll have to be more open ended with things and work with more natural materials. That’s certainly not what we’ve done that often in our school. We’re usually just a little bit more of a traditional school. So that all has to change. I can’t imagine that we can go back to doing things that we have been doing. I think we’re going to need to learn how to be a little bit more improvisational in our techniques. Because, number one, you can’t do any sensory play, it’s not even allowed- it’s too risky- which is a huge part of play. You know, you can’t do play dough, you can’t do water play, or sand, or any of that kind of stuff- so that really limits a lot of the day. And we’re going to have to monitor who’s using the paint set, clean it before it’s passed around - so many things to think about. I mean, how do you limit sharing of toys in a preschool? It’s tough.


Does your school have support to start adapting in all of these ways?
It feels like it’s just on us. I know that our school got a grant to be able to stay in operation and be able to afford cleaning supplies. But I would guess that, no, that’s not going to include anyone coming to train us on new techniques. That just seems to be how things operate. We already didn’t have a whole lot of support. People come by and help us figure out if we’re ready for reviews but there’s a little bit less of focus on things like - are you creating great relationships? Or, how can we rearrange your classroom to be more beneficial to these kids with these specific behavior issues? So, there’s not a whole lot of that. We have had some really good people coming to work with us in the past. But it’s just them and you can’t rely on it. It doesn’t mean there’s not support out there, but we don’t get it all the time.

I don’t know what’s reasonable to expect. It would be nice to have just something to give us a little bit of a break. You know, even just to clean the classroom. Just something to not have to be face to face, where we’re on with the kids for all of that time because it is exhausting. It’s a little exhausting normally, but especially under these circumstances, I feel like it would be super beneficial to just have some time for teachers to meet together and talk to each other and not feel so alone. Yeah, and having people offer suggestions on how to rethink lesson plans or you know rethink how to have more of an outdoor classroom. How should we do that? Those sorts of things. It would be great to have a virtual training, if there was time for teachers to take that training that wasn’t their own time. I feel like that would be really beneficial. I think everybody at our school feels out of their depths- you know, just trying to keep their head above water right now- trying to keep themselves not stressed out because it’s so hard to keep the kids calm if you’re not calm. It’s a little maddening if you feel like you don’t have any control of  the situation or yourself and then you’re trying to keep a classroom full of kids under control. Yeah, so I think that would be a huge help to all early childhood workers. I don’t know how that would happen, but it would be helpful.


There is so much that’s hard about this time. Is there anything you see that feels hopeful to you?
I am inspired by my co-workers who have been at work through this whole thing. They’ve been dealing with a lot and they still feel a lot of pride in what they’re doing and know it’s really important. It is nice to go back and see them pushing forward and really being there for the kids. They stayed in a risky environment rather than get paid more on unemployment because they believe in their career. And it’s not an easy thing to do and not just anybody can do it. That gives me hope that there are people who still care and still deem this to be essential work.

To encourage, enrich, and empower human interactions around children and their helpers.
​For more information check out our social media pages below or email us at info@simpleinteractions.org

All content is property of Simple Interactions, Inc., a 503(c) nonprofit organization. All of the content and resources on this website are made free and accessible under the terms of the Creative Commons Attribution-NonCommercial-ShareAlike 4.0 International (CC BY-NC-SA 4.0) license.  Please review the terms before using and sharing.