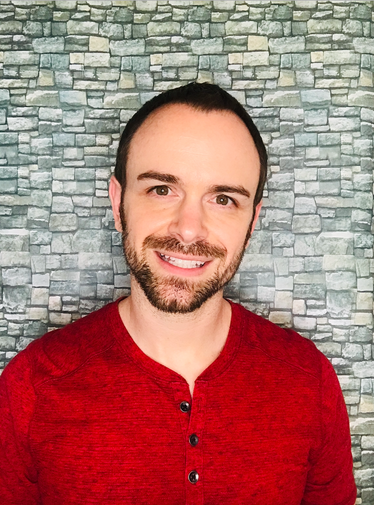 Brandon’s SI Story
Brandon has been a museum educator since 2015. When his museum closed, a lot of intentional thought went into how to reach learning goals while following health and safety guidance from American Camps Association and the CDC. For these reasons, the museum decided it was more beneficial and feasible to engage children through virtual programs. Brandon continued his work from home designing and running Online Museum Classes. Here are some excerpts from our July conversation with him about creating engaging programming and building relationships online.

When the COVID-19 stay-at-home orders started, how was your work impacted?
The museum shut down in the middle of March. Initially it was like: ‘Hey, we’re going to plan for in-person summer camp because we don’t know if it’s gonna happen or not.’ I feel like it was just a lot of frustration and uncertainty. And then I think it was the beginning of June that essentially the decision came: ‘Okay, in-person summer camps - not doing them.’ So we made the switch to Online Museum Classes.  We did end up piloting a few online test sessions in the spring just to see like: ‘Hey, can we do this? Are people interested?’ We sent out an email to members and said: ‘Hey we’re gonna do some stuff- cool let’s check it out.’ So we got good turnout for the couple online sessions we did. And we thought through and fine-tuned what we had done. These test runs became the first sessions. As we got the Online Museum Classes up and running, we had kind of joked a little bit like: ‘We’re driving over a chasm and we’re building the bridge underneath us as we’re driving across.’ And for the first probably four or five weeks, that’s what it really felt like. And now we’re in the sixth week and things have finally settled down a bit. So it feels like I actually have brain space.

How did you prepare for online summer Online Museum Classes?
So with the online stuff, we thought about what really is the benefit to us doing this. And what are the things about our traditional summer camps that we can translate to the online space and what’s a way to make this fun still, and engaging? I think some of the things that we landed on were: ‘Hey, these need to be live sessions.’ Because there’s a value to interacting, right? And there’s a value to interacting with us. We came to this realization that we, the personalities of summer camps, are also a big reason why kids come to camps. I feel like I’ve been there long enough that I know people on a first name basis, I see kids and grownups in the off season and have conversations with them. So we thought that was important to get live sessions, to get us involved.

Then we were also concerned about screen time. So we didn’t want it to be like: ‘Oh, summer museum classes are like eight hours long.’ We can’t do a marathon session for our sanity or for anyone else’s. So we decided to do bite size sessions… we wanted to keep them at essentially 40 minutes. I think the other part of it, too, is figuring out how to get the kids engaged and excited when they’re staring at the screen for that 30-40 minutes that they’re watching you. So we’ve been trying to do some sort of interaction. And whether that’s like the reaction buttons with the ‘hands up’ and ‘clap your hands’, asking different questions, or getting them up and moving around like, ‘see if we can flap our wings as many times as a crow’ or whatever.

We were also worried about: ‘Okay, what if multiple siblings sign up or if we were to offer different ages?’ We don’t want overlapping times in case they only have access to one device. We settled on: ‘You sign up and your family essentially can all share the screen,’ and we staggered stuff throughout the day. We decided on Monday’s session we’ll give you a week-long challenge, some sort of activity where you have to create something. This week, we’re doing ancient Egypt. We’re talking about the Nile River. So we’re doing like a ‘you build a boat, see if you can get it to float, if you can get it to hold weight’ sort of challenge. And then this Friday’s session is the wrap up. It’s sort of a show and tell, open house kinda thing where kids can show off what they made and talk about it.

What has it been like to build relationships online?
You know we try to build in some time for people to share stuff. And I think part of it too is just kids seem oftentimes super eager, like: ‘Hey, let me tell you about this thing.’ Part of it has been some of the sessions have only had a few kids in them and so there've been opportunities. And that’s more just random, you know by chance there’s only been a few kids in a couple of sessions depending on the time of day.

There’s been one particular kid that we’ve been talking about a lot that’s come week after week and we’ve been developing quite the relationship with him. You know, oftentimes he ends up picking the session where he’s the only one and so the class just becomes a conversation and he’s always excited - oftentimes he leads the conversation. Wherever he wants to go, that’s the direction we take it in. And we do these office hour sessions where people can just drop in, ask questions, get help with their projects, or just talk about the topic. And so that’s been an opportunity, too, to build relationships. Actually the kid I’ve been talking about - he came in like a week ago, he’s like: ‘Alright what are we learning about today?’ I said, ‘Actually, it’s up to you - you tell me. We’re just here to talk about what you want to talk about, ask some questions.’

What would be helpful for the field from your perspective?
I think that it’s super important to have voices heard and acknowledge, in a general sense, people’s expertise. There’s things that educators know that other people in the whole chain might not know.

I do think the online thing can work. It takes some different thinking, right. You have to think about ways that play to the strengths. Instead of, ‘How could we make online be like school?’ Maybe what you should be thinking is: ‘How is it different and how can we make this unique and engaging?’ I think part of it probably also is workload and time and there’s probably not enough hours in the day to make it the most amazing thing that you would ever want. I would say: ‘let people be creative’ and I think this is a great moment for us as a society to also think about things in different ways and look at things now and think: ‘We used to do this thing this one way, why did we do that? Do we need to do that anymore?’ I think there are opportunities for the education field to just try some new stuff and see what sticks and what engages kids. And also having good support, right. I think that’s the other part of being in a situation where you’re like: ‘Hey I got this idea, I wanna do it.’ So it is having that support too.

To encourage, enrich, and empower human interactions around children and their helpers.
​For more information check out our social media pages below or email us at info@simpleinteractions.org

All content is property of Simple Interactions, Inc., a 503(c) nonprofit organization. All of the content and resources on this website are made free and accessible under the terms of the Creative Commons Attribution-NonCommercial-ShareAlike 4.0 International (CC BY-NC-SA 4.0) license.  Please review the terms before using and sharing.